Curcumin 180 it is a supplement that supposedly consists of two “miracle kitchen ingredients” that can stop inflammation and eliminate or prevent a number of different diseases. But can it really? Is this supplement really as incredible as it is said to be? Can it really work miracles? Or is Curcumin 180 a scam that is just going to be a waste of your money?

Since you are reading this review I am guessing you are a bit suspicious of it all, and rightly so. There is some misinformation out there and in this review I hope to set the record straight. I will be going over some of the red flags that caught my eye, some misleading claims made, the science behind it these two ingredients, and ultimately whether or not I think this product is any good or if it is a scam.

So you are suspicious that Curcumin 180 might be a scam, are you? Well… Then you probably came across the video presentation that was titled “The 2 “miracle” kitchen ingredients that stops pain and destroys inflammation!” That you can see here…

Everyone that watches this video presentation should be suspicious. It is just the way over the top “salesy” and things just seem too good to be true.

Some of the claims made are that these two common spaces can help you lose 10 pounds in 30 days, eliminate headaches and pain, give you healthier skin that you haven’t had since you were a baby, and it can fight “virtually every disease known to man”.

And the the spokesperson in the video tells you that the medical industry hates him and is trying to get the video taken down because this is going to disrupt their entire industry and lead to big losses.

Ya, ya, ya… I get it… The medical establishment is trying to shut this guy down in the video might not be up for very long. But it is not like I haven’t heard this 100 times before. I reviewed “scammy” health products all the time, such as Herpes Blitz Protocol & Fungus Hack, and they all seem to say this same exact thing.

The guy claims his name is “Harvey Gray”, but this is a lie. The picture that is shown of him in the video presentation is a fake. I took the liberty of looking up this picture online and found that it is actually a stock photo that anyone can purchase. As you can see it is available on Shutterstock… 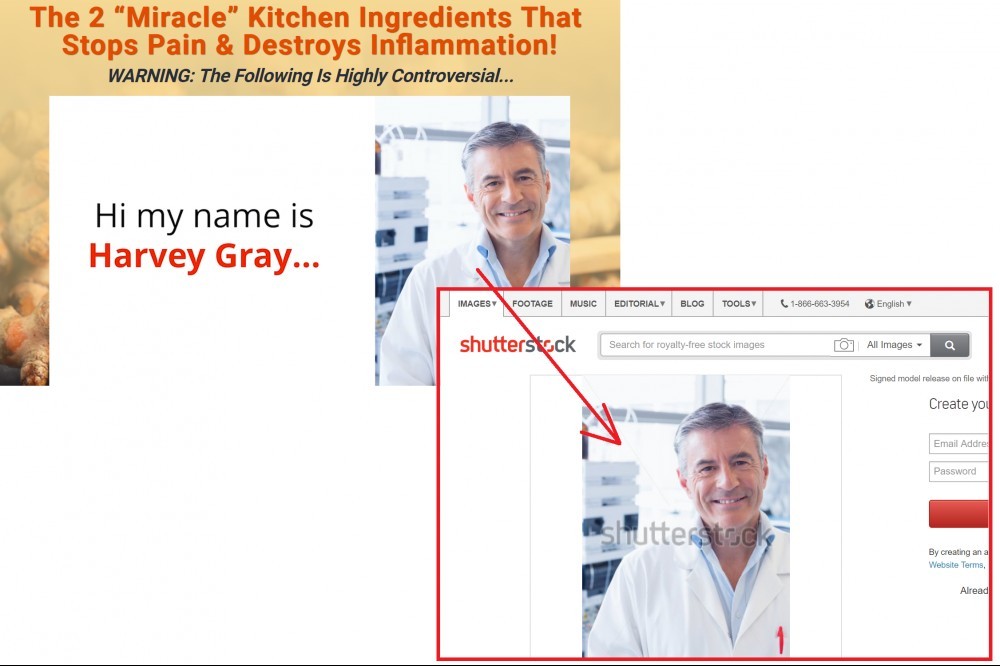 He claims to be the chief medical researcher at DirectFormulas but this is one of many things that I have found no proof of. I tried looking around for this DirectFormulas company and was not able to find anything. He claims that it is a team of scientists, doctors, and health experts whose mission is natural health, but this seems to be just another lie.

In modern times it should be easy to find information about a company such as this online. I can’t find anything related to this so I have to go with my gut instinct and say that this is probably all made up.

How These “Miracle Ingredients” Supposedly Work

If you watch the video presentation then you are well aware of how these “miracle ingredients” supposedly work. He mentions it about 100 times in the video… They target inflammation, which he claims to be the cause of all major health problems.

However, this is somewhat misleading.

This isn’t a lie, it is just misleading and below I will try to explain it better so you have a better understanding of inflammation’s impact on health.

But There Is Truth To It

You are probably thinking… If inflammation is the cause of all diseases, then why not just start taking ibuprofen every day?

Well… Believe it or not… This has been shown to be somewhat effective. According to Harvard Health, people who take anti-inflammatory drugs regularly are less likely to get degenerative diseases such as Alzheimer’s and many others.

You see inflammation is both good and bad. It is your body’s natural immune response and is good to some extent, but when it sticks around too long… After the threat is gone, this is when it becomes a problem. So what he says in the video presentation is true as far as this goes.

Some Science For You:

It it is obvious that inflammation is the problem of diseases like arthritis, that is well known. But when it comes to things like diabetes, cancer, Alzheimer’s… How is inflammation the cause of these?

There is more and more scientific research being done on this topic and more and more proof building up that inflammation very well might cause many diseases.

Take diabetes for example: People with higher levels of inflammation are more likely to become insulin resistant and develop diabetes. So while this might not be the only cause of diabetes, it is a cause and reducing inflammation should in fact reduce your chances of getting diabetes.

And believe it or not, reducing inflammation can reduce your chances of getting cancer. There is definitely more research that needs to be done here, but from what I have read there is definitely a link between the two. Take a cigarette smoke and asbestos for example… Both are well known to cause cancer, and guess what? They are also both well known to cause inflammation. Inflammatory substances have also been shown to damage DNA which can lead to mutant genes and cancer.

What Are These 2 Miracle Ingredients?

So what are these two miracle ingredients? Well… They are turmeric and piperine.

I actually wrote a post on the benefits of Curcumin with Bioperine (type of peperine) so I am well aware of what these two ingredients do. I also supplement them because they are something that I believe in.

Curcumin is a chemical inside turmeric that has become very popular for its health benefits and piperine is kind of like a sideline ingredient that has the purpose of increasing the absorption of curcumin.

You can do your own research on turmeric curcumin if you want to. You will find a long list of the many known health benefits. These include skin health, joint health, cognitive health, detoxification, etc.… Which are probably mostly due to its anti-inflammatory properties.

You can also see from the ingredient label below that there is another ingredient called Boswellia extract. This is another natural ingredient that has some powerful anti-inflammatory properties.

But how important is supplementing curcumin with piperine? After all, there are cheaper supplements online that have turmeric curcumin by itself.

Well… The truth is that supplementing these two ingredients together is a big deal, just as you are told. There is a fair amount of evidence backing this up, and one study that I found even shows piperine leasing curcumin’s absorption by a whopping 2000%!

Now can you really lose 10 pounds of fat in 30 days? If this is one of the statements that was made very clear in the video presentation.

The answer to this is… Yes, you can. But of course you can. You could lose 10 pounds in 30 days by taking any supplement… It doesn’t mean that the particular supplement is going to do it for you though.

Whether or not you will lose 10 pounds in 30 days by taking Curcumin 180 is dependent on a number of different things. There have been studies performed that show a link between inflammation and weight gain, but there are a thousand different things that can cause weight gain. Saying that you will lose 10 pounds in 30 days is a ridiculous statement to make and it assumes that you have a lot of weight to lose in the first place.

But anyways… Curcumin 180 should at least be able to help you lose weight if that is what you are looking to do. One study done in 2017 that I came across showed that a more inflammatory diet is linked to more weight gain. The study was done on a massive scale and took into account 1,433 cases of obese or overweight individuals. The findings = that people consuming a more inflammatory diet are more prone to weight gain.

My final thoughts on Curcumin 180 or that it is a good product that is promoted in a ridiculous fashion. I can’t stand the misleading marketing tactics that are used in the video presentation, but the bottom line is that the product is a good product.

Turmeric curcumin along with piperine are proven to have many benefits, including being effective at reducing inflammation, which is further being proven to be a culprit in many health problems.

So it is not that I don’t approve of the product… I like what I see on the Curcumin 180 label, I just don’t like how it is marketed. That said, if you want to purchase Curcumin 180 you can do so on the  official website Here.

I hope you enjoyed my review and found it at least somewhat helpful. Please leave any questions or comments you may have below 🙂 Also, if you have tried Curcumin 180 for yourself and would like to leave a review, I would appreciate it if you left it down below as well.