Is Ultimate Herpes Protocol a Scam? – Pretty Much, In My Opinion 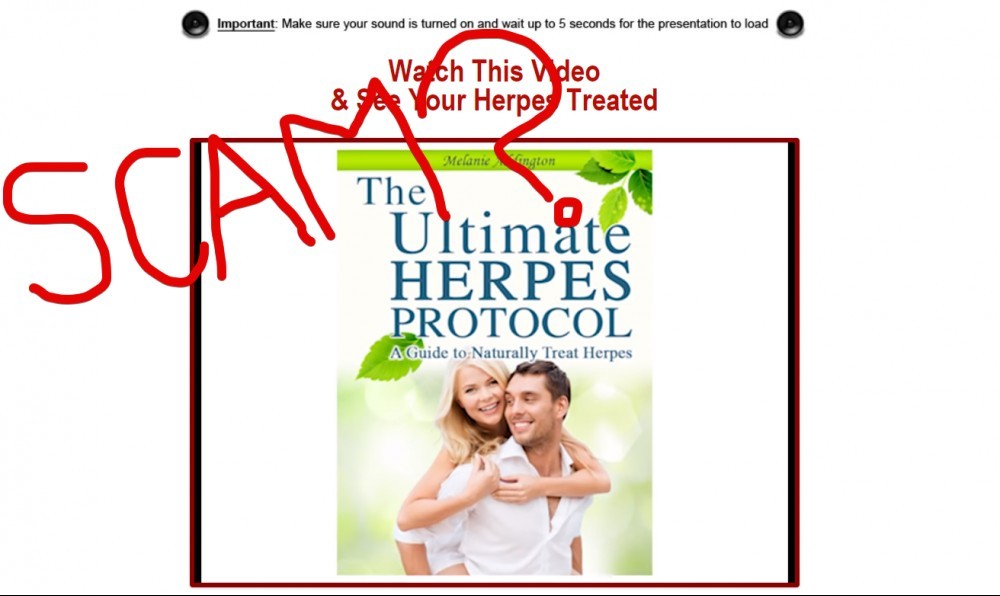 The Ultimate Herpes Protocol claims to be able to completely cure people from type I and type II herpes. Not just mask the symptoms… But completely rid your body of the herpes virus. But does it really? Is this natural protocol really the amazing thing that is claimed to be? Or is this all a scam? Is Ultimate Herpes Protocol a scam that is just going to be a waste of your time and money?

In this review I will be going over what you definitely need to know about this protocol before hand. Much of what you are told is very misleading and/or a lie. This protocol is not the miracle worker that it is said to be and if you do buy into this and follow the protocol, there is a good chance you’re going to end up disappointed and discouraged with your results.

On the Ultimate Herpes Protocol website you are presented with a video presentation by woman named Melanie Addington. She supposedly suffered severely from HSV-2 which she got from her ex-boyfriend, of course all until she came across this incredible protocol… And BOOM… Now she is cured.

It it is said to be so effective that “after just one treatment it can and your nightmare forever”, but of course I was very hesitant to believe this so I dug a little deeper into it all.

You are told that the big pharmaceutical companies are lying to you and keeping the truth hidden. They just want to keep you sick so that you keep buying their medicine, which doesn’t work. This is your pretty typical sales pitch when it comes to these types of products. I reviewed another natural herpes protocol recently, called Herpes Blitz Protocol, which told you the same line of BS… And it also turned out to be a complete bust by the way.

But anyways… She claims that this protocol is backed by scientific studies and proven to work.

As I said, she got type II herpes from her ex-boyfriend and had sores all over her butt. At the doctor’s office she was prescribed acyclovir, which got rid of the sores, but also caused some severe side effects such as hair loss. She also mentions a few other drugs that she told, all of which resulted in side effects that she was not willing to accept.

But apparently her dad is some “medical maverick” that does not follow the norm. He was the one that supposedly looked into this and came across this amazing natural cure that “big Pharma” is trying to stop from getting out to the public.

As mentioned, part of the sales pitch is that the big Pharma industry is just trying to sell you their drugs and doesn’t want to cure you. They want to keep you sick and keep you hooked on their drugs so that they keep making money.

She talks about how the prescription drugs that doctors prescribe will only cover up the side effects of herpes and not cure it. This is true… Very true. But this is because THERE IS NO CURE. Once the herpesvirus is inside you there is no getting out of you. Much of the time it will lay dormant inside of you and not cause any problems, but when it does become active you can mask the symptoms in that is it.

I’ll go over more of why this is the case and why you cannot rid your body of herpes a little later.

Her talking down on the big Pharma industry for providing drugs that only mask the symptoms doesn’t make any sense… This is the only thing they are able to do.

As expected, the sales pitch uses the typical fear mongering approach. She talks all about all the serious health conditions that could potentially kill you when you have the herpesvirus and the intent here is to scare the heck out of you and point you to what she is trying to make seem like the only option, which is this Ultimate Herpes Protocol.

And then of course there is the whole thing about big Pharma being out to get you. While it may be true to some extent that the big pharmaceutical companies try to make money more than they try to help patients, there are a heck of a lot of medications that do very well and the big increase in life expectancy in modern times is largely due to the medical industry, which relies on “big Pharma”, so you can’t say that it is all bad.

I am a huge advocate of natural treatment/remedies. After all… On my website here I talk a lot about different natural super foods for treating a variety of different conditions. But the truth is the truth… Big Pharma is not out to get everyone… They’re not pure evil.

The Ultimate Herpes Protocol is an e-book for fighting off types one and types two herpes. You are told that the protocol outlined in the book works even if you have spent thousands of dollars on prescription medications. This is great news… Because now you might be able to waste even more of your money on an e-book that doesn’t work.

The e-book goes over different foods/ingredients that you can eat to cure your herpes, such as bitter melon and Arsenicum Album, along with tons of recipes for acid and alkaline foods. Basically half of the e-book is filled with different healthy food recipes, which as far as I’m concerned our nothing that special. Many people reading this right now may already be eating foods that are as healthy as this book goes over.

But anyways… This protocol supposedly attacks herpes from three different angles, which according to Melanie Addington, make it the most effective herpes treatment out there:

Where Is The Proof That It Works?

In the video presentation you are told that there is scientific proof that this protocol works. HOWEVER… I cannot find the proof of this. Under the video presentation you are left with a bunch of different links to studies on herpes, but none of them have anything to do with this natural protocol that is being promoted. I also did some independent research on the subject and found it no proof of what they tell you either.

At one point in the video presentation you are told that over 7500 people have found the Ultimate Herpes Protocol to be successful, which I guess means they have used this protocol to read their body of herpes. However, there is also no proof of this either.

Proof is a big deal. Anyone can say anything but without any proof this means nothing. These could easily be on back allies, which I’m guessing they are, since there is no proof that they are true.

Here Is Proof That It Won’t Work (As Stated)

As you may know, viruses basically hijack your body’s cells. They take over your cells and then use them to replicate. So what the herpesvirus does is hides in your nerve cells which your body is unwilling to attack and kill, because it would have to destroy the nerve cells in order to destroy the viruses.

There is plenty of research and evidence of this being the case. You can go to LiveScience.com if you want to in order to get a nice explanation of it all.

You were probably suspicious of this being the case as soon as you came across the sales page. The product is a little bit over-hyped and sounds a bit too good to be true, doesn’t not? I mean seriously… A natural cure that has no side effects and has been sitting right in front of your eyes all this time? Just eating foods they can pick up at the local grocery store to cure that nasty herpesvirus?

The truth is that this protocol simply isn’t going to work as stated. Since the protocol is basically to eat healthier, there will be some benefits and you might see less symptoms one on this protocol, but is not going to completely read your body of the herpesvirus as claimed.

Anyways… I hope I cleared a few things up for you here and I hope that you found this review helpful. Please leave any questions or comments you may have down below and I’ll get back to you soon 🙂