Is Miracles From THE VAULT a scam book that you should probably just avoid? Or does this really contain the hidden secrets to achieving optimal health without running to the doctor?

In this review we'll be going over what the book is about, the types of information you'll find in it, complaints and more.

*Spoiler Alert: It's not the miracle book it is promoted as.

We first came across the book after landing on a ridiculously long video presentation by Dr. Allan Spreen, an advisor for HSI, the Health Sciences Institute. You may have seen this video too. 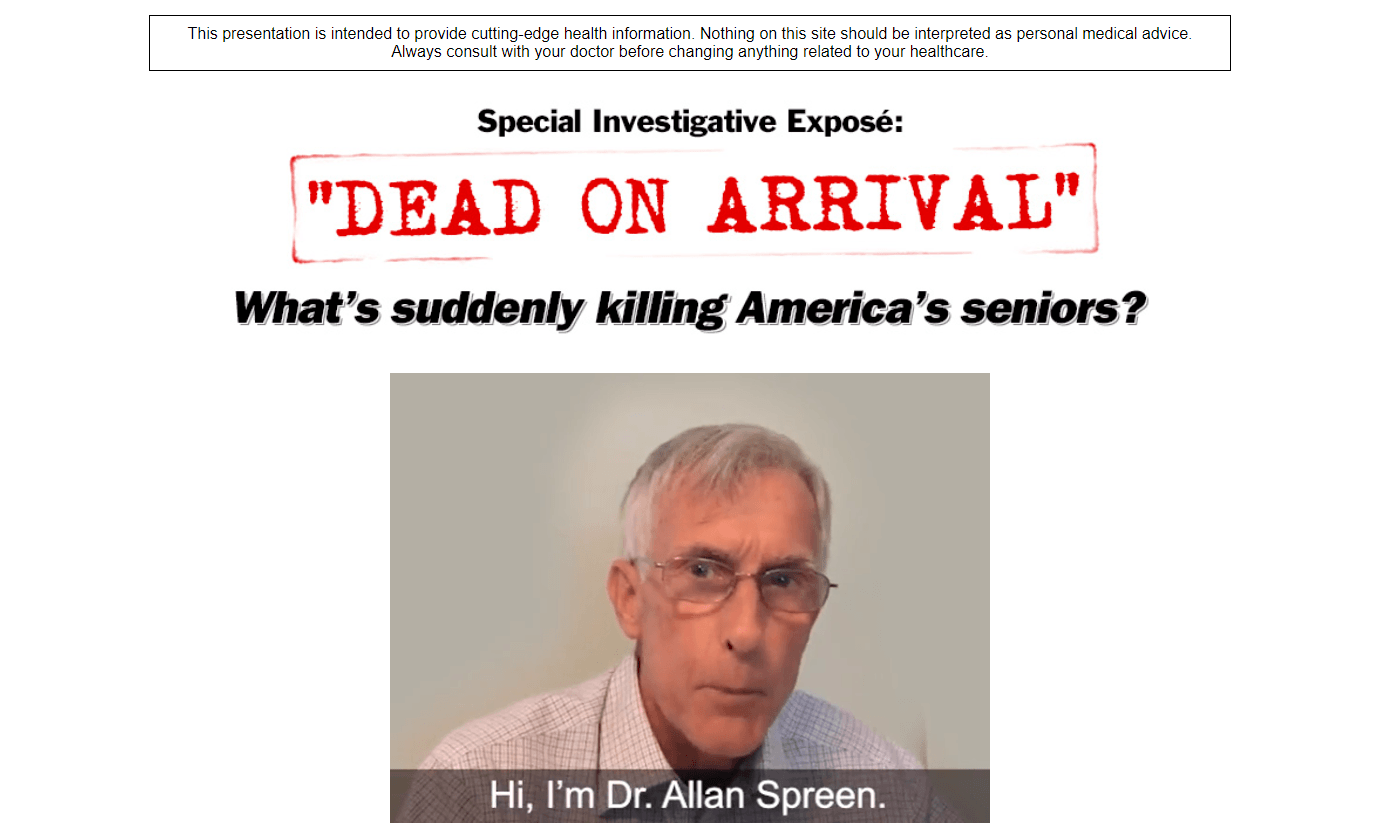 The tone in the presentation was scary. There was lots of talk about people dying from a "deadly crisis" that has been "killing seniors at a relentless pace".

Of course this caught our attention, although, we're always a bit suspicious of claims like this.

Later in the presentation we are told that the killer he is talking about are FDA-approved drugs, which do have a pretty bad reputation. After all, when there are estimates that as much as 128,000 people die per year from taking prescription medications, a bad reputation should be expected.

However, we didn't care for the fear-mongering style of the presentation. And while there are a lot of deaths from prescription drugs, the numbers of people that have their lives prolonged and even saved by such medications would be much higher. There are always pros and cons to weigh... and he makes it sound like if you are a senior you are going to die if you don't hear what he has to say (which turns out to be sales pitch).

Besides the over-the-top presentation, we also found that fake images were used. Throughout the video we were shown various individuals who supposedly died from medications... such as "Hank" shown here... 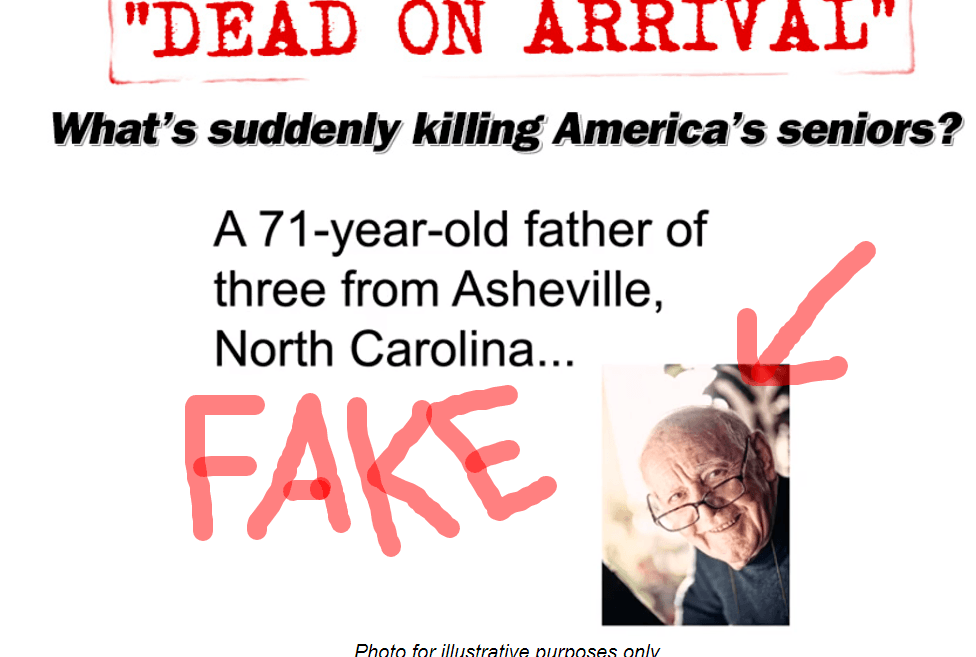 But after searching for the image shown on Google we were able to find that it is actually a stock photo, meaning that anyone can purchase this photo and use it as they wish... 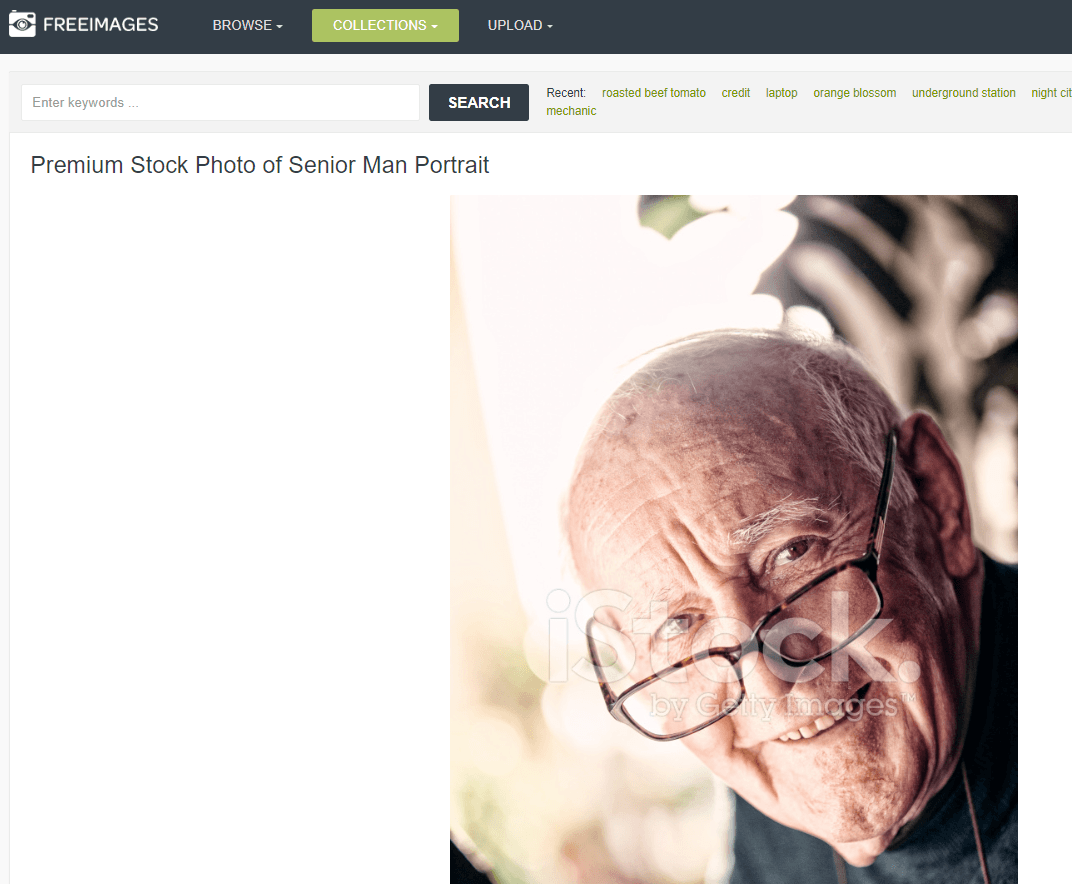 After looking into things further, it appears that all of the photos shown in the presentation are fake, and they even state that "Photo for illustrative purposes only." in small print below the video... 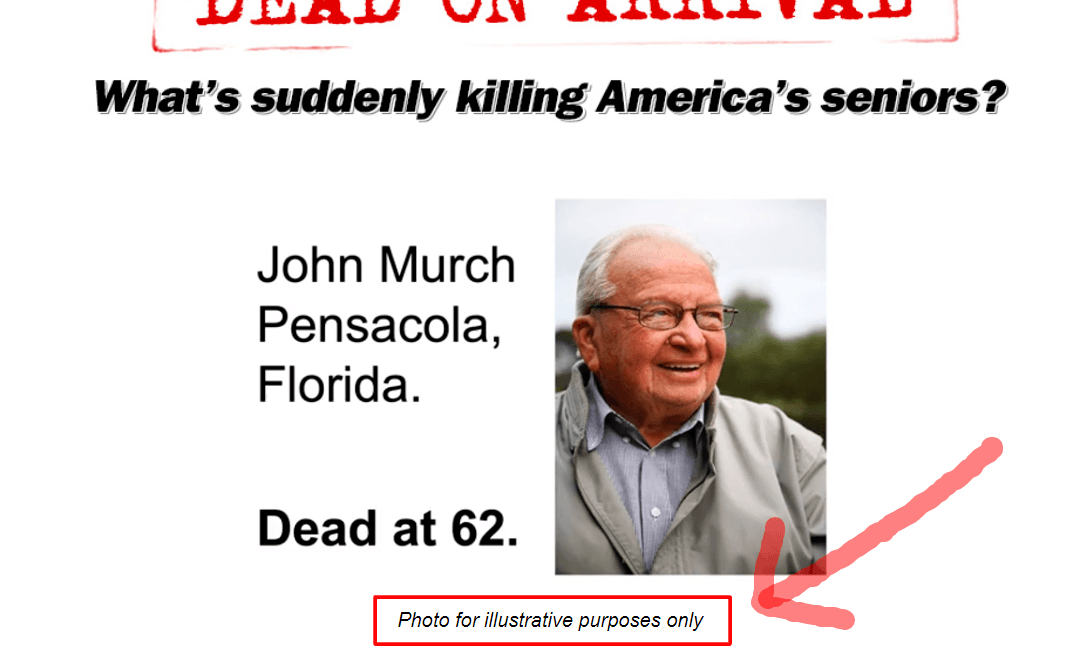 The presentation is basically a concoction of fear-mongering, bashing the pharmaceutical industry and the media, and over-hyped talk about natural cures.

The idea is that you can avoid the harmful medications that most people are taking, and all the information is included in the Miracles From THE VAULT book, which you can supposedly get a "free copy" of.

But of course nothing is really free.

What Is Miracles From THE VAULT? 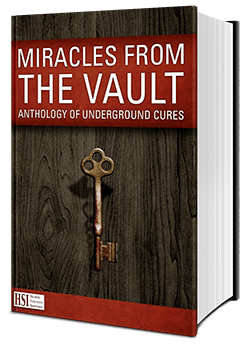 Miracles From THE VAULT is a 575 page book from the Health Sciences Institute that is a compilation of 18 years worth of investigative medical research, and covers all sorts of health conditions. It is geared towards a senior audience and covers alternative health treatments and cures for conditions & ailments that come with aging.

The book is broken down into 10 parts:

With a length of 575 pages and 10 different parts, you can imagine there is a heck of a lot of varying content here. Treatments are covered on everything from Lyme's disease and the flu, to treating dementia and Alzheimer's, foods you can eat to help with diabetes and foods you should avoid, and even natural treatments that have been proven to help get rid of cancer.

What the book also is, and what many readers have complained about, is a marketing medium to promote other products, as we'll discuss in a bit.

Is It Really Free?

The book can be independently purchased on websites like Amazon, where it sells for around $30. However, some of the sales funnels floating around the internet promote it as being free.

BUT, if you want it for free you first have to subscribe to the paid subscription that the Health Sciences Institute offers, which costs either $74 or $37 per year... 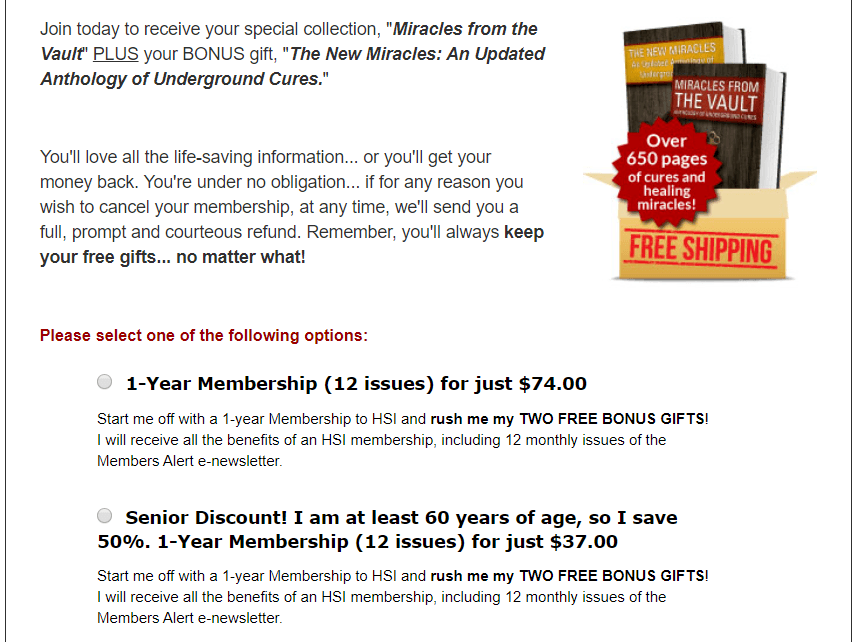 This is how they lure in subscribers to their subscription services... through "free" books and such.

The good news is that they do have a money-back refund policy if you are not satisfied. However, we imagine you'd have to pay the return shipping for the "free" book. They likely won't let you keep it.

Who Is Health Sciences Institute

HSI is an independent organization founded in 1998 that provides information on alternative health treatments that people aren't likely to hear from the mainstream.

Their staff consists of medical professionals and other natural health enthusiasts who provide in-depth research on various health-related topics.

Their marketing can get a bit out-of-hand at times, over-the-top to say the least, but the fact is that they do provide some good research... although often misleading.

Does The Author Even Exist?

There is also some speculation as to whether the author, listed as Jenny Thompson even exists. We have not been able to find any reliable photos of her and her collection of publications seems peculiar. 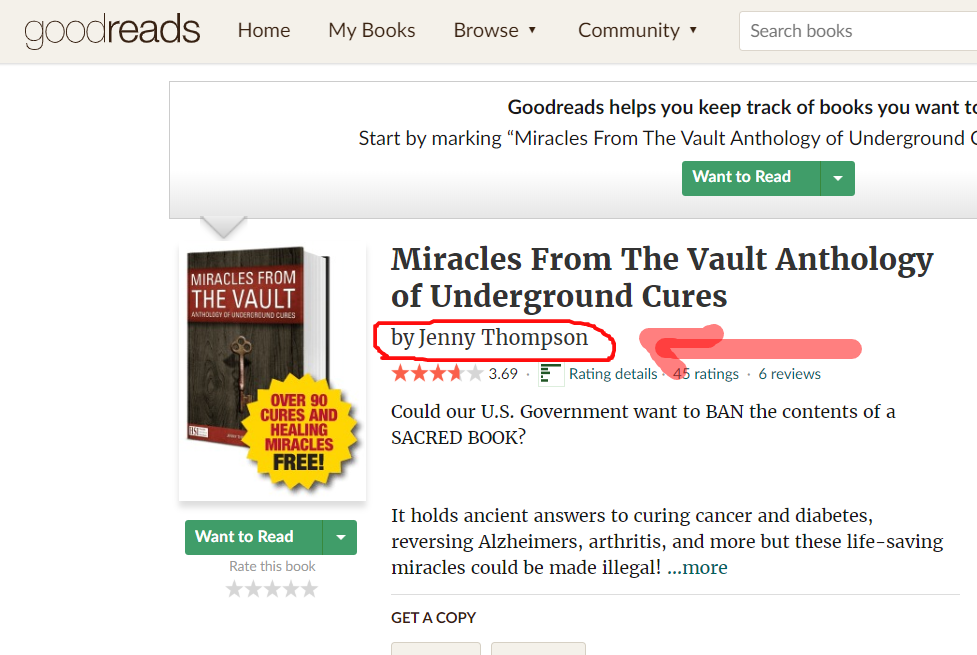 For example, other books under her name are on topics like war games, the Kremlin and special needs children... quite the variety. 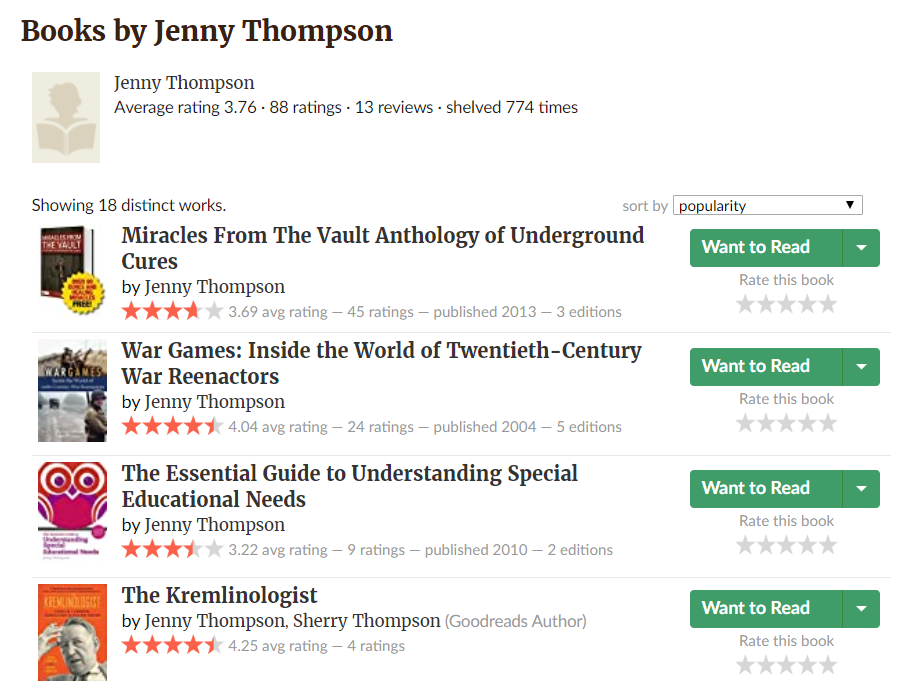 But we won't get too into this. It was just something unusual that is worth mentioning.

The book has mostly positive ratings from readers, on both GoodReads and on Amazon - pretty good overall reviews. However, there are some complaints that should definitely be brought to your attention. These include the following.

The complaint below states that "the book is a marketing platform" and that it "is not what it pretends to be"...

And then the following review states a similar opinion, which is that the book has "hidden advertisements"...

As if that isn't enough, here is a third from another reader that found the same to be true, stating that "This is more of a collection of people/companies wanting to sell their products. Disappointing"...

Now as mentioned, there are lots of good reviews too, and people that have tried out the various natural remedies with success, such as this person that claims the one Lyme's disease treatment in the book worked for the...

Here at HealthBuster.org we are fans of natural treatments and alternatives to prescription medicines, which are often too high priced and have too many negative side effects.

So with this in mind, you can guess that we like this book's focus on natural remedies. There is a heck of a lot of good information contained here with the potential to treat all sorts of conditions... to some extent.

Now what we don't like most of all is the way in which this is promoted and the somewhat misleading information it provides. Many of the claims made, both in the promos and in the book, are hyped up too much and don't have much solid backing. Furthermore, as mentioned in the complaints, the book seems to be a marketing medium to sell people on other products.

Is Miracles From THE VAULT a Scam?

Although the book is over-hyped, is largely a marketing medium, overstates of its claims, and has an author that might not even exist (maybe a pen name?)... it's still not quite a scam... at least in our opinion. The bottom line is that the book does have real value and there is a lot of good information in it.

A lot of products we review here are way over-hyped and promoted in misleading ways, Urgent Cell Repair being a recent example, but they still have real value.

As you can probably tell, we aren't going to be promoting this book. There are better options out there that contain more straightforward, less biased information and that come from more trusted sources... and that are cheaper (if you were thinking about buying it on Amazon).

That said, we aren't going to tell you not to buy it either. As just stated... there is a lot of good information here... and a heck of a lot of information in general. However, it might be a bit overwhelming and it might be a wiser choice to purchase a book that is specifically focused on whatever condition/ailment you are trying to treat. Amazon.com has the widest range of books available, so that would be an easy start to begin your search.

Now its you're turn: What do you think about Miracles From THE VAULT? Let us know in the comment section below...