Is Eagle Eye 911 a Scam Supplement? – Read Before Buying!

Can Eagle Eye 911 really improve your eyesight or is this just another scam supplement that is going to be a waste of your money?

That is a big question and it is one that you should definitely be asking yourself. After all, there are plenty of “less than ethical” supplements out there that do not do what they’re supposed to, and of course you don’t want to waste your money on something like this.

And… I’m probably not the only one that came across the video presentation for this supplement and thought it sounded a bit “scammy”.

In this review I’ll be going over what Eagle Eye 911 is, the ingredients and whether or not they actually work, some concerns I have, complaints and more.

But before we get into all of that, let’s first talk about the sales pitch, which is a bit ridiculous in my opinion.

Maybe you have seen it or maybe you haven’t, but there is a video presentation out there that I came across which looks like this… 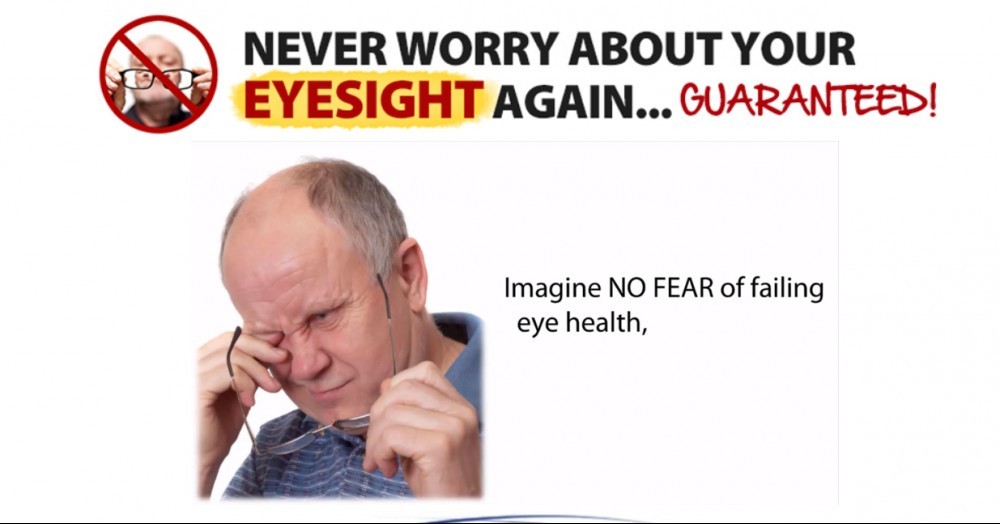 And as you can see this video is titled  “never worry about your eyesight again… guaranteed”.

Really? You’re going to guarantee that whoever takes this supplement will “never” have to worry about their eyesight again. That is quite a bold to claim to make, and honestly it sounds a bit” scammy”.

The spokesperson in the video, who says his name is Dr. Steve Klayman, claims to be a renowned health care practitioner and says that they have put together some new “secret formula” to improving eyesight.

This formula is supposedly so good that it “can give you twice the protection of typical vision supplements” and it is “59 times more vision defense than a best-selling multivitamin”. HOWEVER, these statements are misleading as you will see soon.

The video goes on and on, for what feels like forever, and mostly just repeats the same things over and over again. It was pretty painful to sit through and if you did end up making it through the entire video you should give yourself a pat on the back.

It’s All About Lutein

Most of the focus of the video presentation is on lutein, which is found in green leafy vegetables and is claimed to protect retinal cells from damaging blue light.

There is some talk about other ingredients that are included in this supplement, but the main focus is on lutein… And supposedly this supplement has some “special” form of lutein.

There it is also a lot of talk about how other multivitamins out there on the market have a cheaper form of lutein which does not absorb well and will not work.

The spokesperson compares it to some random multivitamin and says that Eagle Eye 911 can give you 59 times more eye protecting power, yet this claim is completely unsubstantiated.

You are probably reading my review now because you want the truth and you were suspicious that this might be a scam yourself. The reason for this is probably because there are many red flags that make this seem a bit untrustworthy.

Also, there are some red flags that you probably are not aware of.

For example, I did a little research into this “Steve Klayman” guy and I am pretty certain that he is a FAKE. There have been more than one picture shown of this guy in different promotional material and the problem is that they show 2 totally different people… 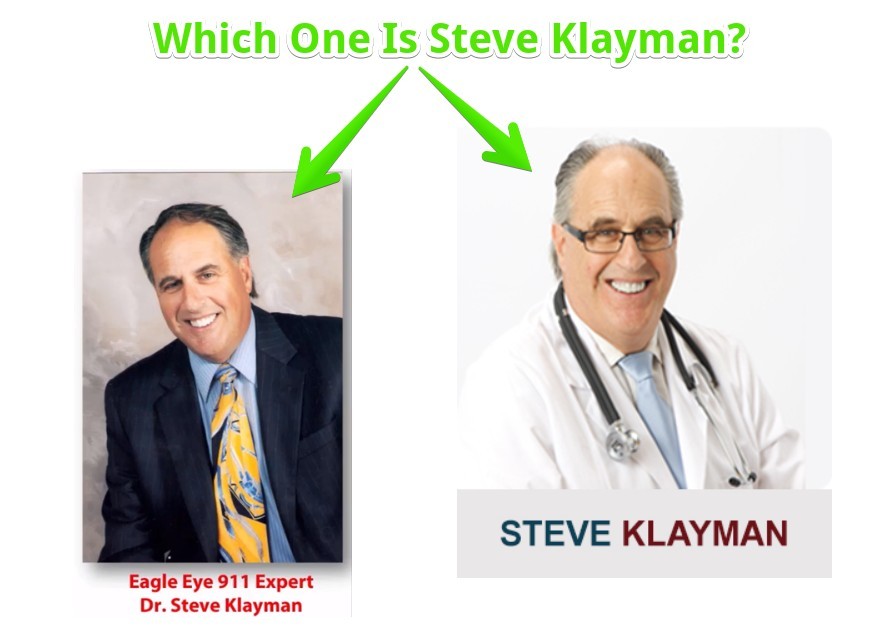 Now I’ve come across this sort of thing many times in the past when reviewing potential scam supplements. HOWEVER, this still could potentially be a real doctor. I understand that some people don’t like putting images of themselves all over the Internet, so the image could be a fake for privacy reasons.

Eagle Eye 911 is a natural eye support supplement that is manufactured by company called Phytage Labs, which doesn’t exactly have the best reputation.

Although there are many “scammy” things going on here, such as the ridiculous sales pitch, overall the supplement does seem to be something that has potential. It contains proven ingredients, which I will go over now…. and this is the most important thing.

If you can’t read that label, that’s fine, I will go over the ingredients you need to know about, the more important ones…

Lutein is a cartenoid that has been very well proven to benefit eye health. It is also a powerful antioxidant that is located in the eye, so of course it is going to be important for eye health, right?

Eagle Eye 911 provides 20mg of a “special, patented, fully absorbable form of lutein”. 20mg is a good dose, so this is nice to see. HOWEVER, there was no information I could find about it being a “special” form of lutein that is “patented”. I’m not sure how true this statement actually is.

But anyways… Yes, lutein is something that benefits that eyes and this is not just some myth.

The National Eye Institute states that people who supplement lutein are less likely to develop AMD (age-related macular degeneration), which is a major cause of vision loss. This was concluded after an indepth study was conducted by the National Institutes of Health in 2001.

It has also been shown to reduce the risk of cataracts.

There is a legend that says airplane pilots in the British Royal Air Force bombed an enemy during WWII with incredible accuracy after eating bilberry jam. They claim their night vision was improved.

This claim has been later proven by science. It can help increase your ability to see at night and holds some powerful antioxidant and anti-inflammatory properties, which is always a good thing.

It has also been shown to reduce eye fatige by a 2015 study published in The Journal of Nutrition, Health, and Aging.

According to WebMD, grape seed extract can help with eye disease that is related to diabetes.

In a 2011 study published in Molecular Vision, grape seed extract was found to protect the epithelial cells on the lenses of our eyes from oxidative stress and damage. Because of this researchers concluded that it might be a potential effective treatment against the development of cataracs.

Vitamin A is an antioxidant vitamin that is pretty well known to help with eye health. This is what carrots and sweet potatoes have a lot of. And you have probably heard that they are good for your eyes at least once before.

One of the ways that it helps is by protecting the surface of the eye effectively keep away harmful things such as bactaria, viruses, etc. It has also been shown to be effective at reducing inflammation in the eye, which can cause wide array of problems.

Taurine is extremely important for our vision. In fact, it necessary for the chemical reactions that produce our vision, which is why a deficiency in this amino acid is often associated with retinal decline.

Taurin is also a good antixodiant that helps protect the ocular tissue from damage done by free radicals.

Zinc helps bring up vitamin A from the liver to the retina, which then helps to protect the eye. A deficiency in this mineral can lead to cataracts, cloudy vision, poor night vision and so on.

Taking  zinc supplements has been shown to slow the progression of age-related macular degeneration, which as I mentioned above is a common problem for many people as they age.

So Do They Work?

There is no doubting the fact that this concoction of natural ingredients definitely has potential to improve vision.

Now is it going to be a guarantee that your vision improves upon taking this? Absolutely not. I know that they say you will “never have to worry about your eyesight again… Guaranteed”, but this is not true.

Hopefully it will work for you, but there is definitely not a guarantee.

Concerns… The Company Behind It

The company behind this product is Phytage Labs, which as I mentioned earlier doesn’t exactly have a very good reputation.

I wasn’t able to find any good reviews from people complaining about Eagle Eye 911, however you can see below that another one of their popular products, Tinnitus 911, isn’t exactly very well liked…

I’m very familiar with the product this guy is talking about because I have reviewed it. It gets a heck of a lot of complaints and the main problem that it has is MISLEADING ADVERTISING.

The main reason that Phytage Labs gets a fair amount of negative reviews (for various products) is from the misleading advertising. That said, if you actually know what you’re getting and don’t buy into the over-hyped sales pitch, then you probably won’t be too disappointed.

The cost depends on how many bottles you purchase. The more you purchased the last you have to pay per bottle…

You can find some cheaper alternatives on Amazon but this is not as overpriced as I was thinking at first.

A lot of good alternative products out there are right around the same price.

I have no idea the difficulty of actually getting your money back if you try, but it is still reassuring just knowing that they have something like this in place.

Final Verdict – Scam or Not?

I would not call Eagle Eye 911 a scam. In fact, as I’ve mentioned, I do think this supplement has the potential to improve vision. Many of the ingredients are well proven to possess vision-improving properties.

I just don’t get why they can’t promote it anymore straightforward and honest way, instead of the over-the-top sales pitch.

Overall this supplement really doesn’t look too bad. When I first came across this product I thought it was going to be a complete scam, but after digging a little deeper I’ve changed my opinion.

If you want to you can purchase Eagle Eye 911 on the official website here.

But anyways… I hope I’ve given you a more realistic look into this supplement so that you can make a more informed decision.

Comments or questions? Leave them below and I’ll get back to you soon 🙂