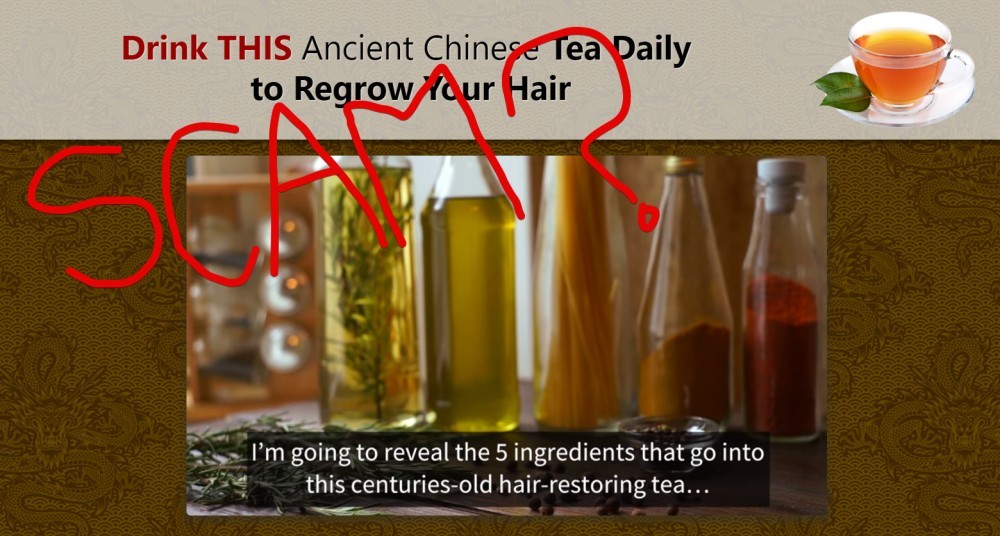 Regrow Hair Protocol is supposedly some incredible natural hair restoration protocol that was put together by a guy named David McKenna. He claims that all sorts of people are seeing success with this protocol, but can you really trust what he tells you? Is there any truth to this or is Regrow Hair Protocol a scam that is just going to be a waste of your time and money?

The truth is that this is somewhat of a scam. I wouldn’t consider it a complete scam because following the protocol could produce positive results, but the video presentation is definitely extremely misleading and lead you to believe that this protocol is much better than it really is. In this review I’ll be exposing Regrow Hair Protocol for what it really is so if you are suspicious of the claims made about this and are looking for the truth then keep reading.

Legend has it that David McKenna discovered this secret protocol from a certain kind of tea that was made in the forests of southwest China… or at least this is what he tells you. Apparently he got these ingredients from “hair hangers” of China that would perform entertainment acts while hanging from their hair. What he tells you is that they used to drink this special red tea that would keep their hair healthy, strong, and would even prevent baldness.

The video presentation, if you made it through the whole thing, was agonizing. David tells you that he is going to reveal the secret ingredients in a couple minutes and then goes on and on for 55 minutes total… Ridiculous.

But anyways, some parts of the video presentation were pretty entertaining. At one point David talked about what led him to discovering this protocol. He claims that he was experiencing depression from is hair loss and worst of all, his wife Sarah didn’t want to have sex with him anymore. It all came down to being sex deprived and needing more sex.

He claims to have used this formula to completely reverses hair loss and as you can see from the screenshot talk below… He saw some decent progress, although he still definitely does not have a good head of hair. 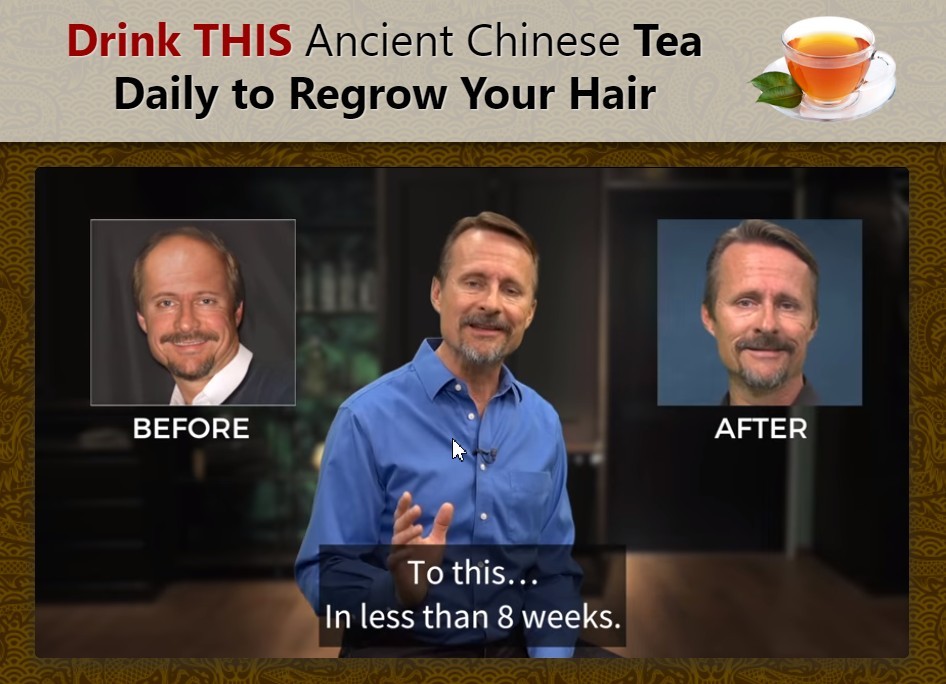 Oh ya… In supposedly this all happened in just eight weeks.

But of course, as I mentioned in the beginning, much of what you are told is very misleading and/or lies. Below I will go over some of the red flags that, attention as I was watching this stupid video presentation, which are very common signs of scams based on what I have seen from reviewing previous health-related scams, such as Herpes Blitz Protocol, Outback Vision Protocol, etc.

Of course big Pharma is trying to shut him down. They don’t want this secret to get out in public and are doing everything they can to take the video off the Internet. Well… That is what he tells you at least.

However, I doubt any of it is true. I have heard this claim with many other scam products I have reviewed. He is just taking the typical fear mongering sales pitch approach. He knows that many people are worried about the big pharmaceutical companies controlling everything so he is playing to that fear.

He is just trying to get you to buy into this as soon as possible so that you hopefully don’t take the time to read over reviews like mine.

And of course this is all, or was all, a secret. It seems that all of these new over-hyped health products are secrets that for some reason they are letting you in on. This definitely isn’t any proof that this is a scam, but it is a red flag.

I’m sure I wasn’t the only one who found the background story to be pretty strange. I’m just think about it… David supposedly travels halfway around the world to a remote village in China to try to find some hair loss cure that he doesn’t even know exists. He supposedly traveled out to China with his life savings without even knowing if the people who could tell him about the secret ingredients were even alive or not.

At one point in the video presentation you are told not to use any other hair products, such as Rogaine or finasteride. He tells you not to use them because they don’t work in the will and they give you bad side effects.

Rogain, however, is proven to be very successful among those experiencing male pattern baldness. It definitely does have some downsides, and there could be some negative side effects, but overall Rogaine is a great hair loss treatment, although a natural treatment would be more desirable.

What he is doing here is just trying to scare you away from other products and funnel you into buying this protocol.

Lets first establish that David McKenna does not have good hair. The people behind this Regrow Hair Protocol should have hired a spokesperson that had better hair for a product that is about restoring hair. I think that makes sense anyhow.

Why my calling him a spokesperson? Well… Because I am not convinced that David McKenna is a real person. There is just nothing that I can do to verify his existence. There is no information given that I am able to look up to verify anything about him. And, again, I have seen many other scams that hire actors to promote their products under fake names, so this is not out of the question.

There are a lot of things said in the presentation that are quite impossible. Now I am definitely not going to go over everything that doesn’t make sense, but I can assure you there are a lot.

One example is that of the Chinese hair hangers. He claims that they would drink this red tea when their hair was thinning out and it would be thick in full in a matter of a couple weeks. This is an extremely exaggerated claim. On average, human hair grows around 1/2 inch per month. So going from having thinning hair to having a thick head of hair in a couple weeks is a claim that will never hold true.

#7 – Re-branded Under a Different Name

One thing that you probably don’t know, which I found out from doing research, is that this Regrow Hair Protocol used to be called “Red Dragon Hair Regrowth Protocol”. It is literally the exact same thing, just the name has changed.

The reason this is a red flag is because this is something that is common of scams. With many scams, once it becomes well known that they are scams, the people behind them will rebrand the scam under a different name and to most people it will seem like some fancy new product. 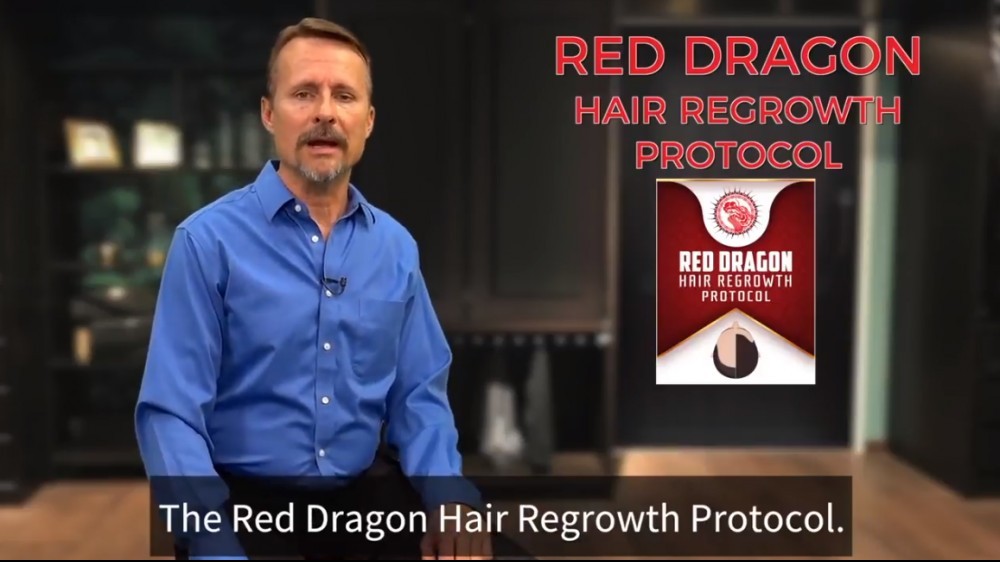 You are told that 63,187 people have successfully used this protocol, yet there is absolutely no proof of this. If this many people have found success with that, I would expect to see all sorts of talk about it all over the hair growth forums online and everywhere else. Yet I do not.

The 5 Secret Ingredients In This Tea

The important thing here is that they all contain quercetin and/or luteolin, which are two phytonutrients that he claims are the secret behind this hair restoration protocol because they help block the cause of baldness, which he tells you is prostaglandin D2.

Is There Any Truth To What You Are Told?

Believe it or not, whenever he is talking about the science behind this, he is telling the truth. Prostaglandin D2 is a protein that has been found to possibly be the culprit behind male pattern baldness. You can do your own research if you wish and you will find that there are multiple studies that have been done which show bald men have higher concentrations of prostaglandin D2. I’ll link a study right here if you are interested in reading it…

I was also able to find a study on how quercetin lowers the amount of prostaglandin D2, and there is also a good bit of information on how luteolin does the same.

If you do some research into this you will find a lot of talk about these two phytonutrients on hair loss forms and people do seem to be having variable levels of success incorporating them in their diets.

What you get is a 75 page e-book that goes over a bunch of stuff, including the causes of hair loss, hair loss myths, foods that you should eat and you shouldn’t eat, shopping lists, and a bunch more.

The book has a ton of information in it, no doubt, but much of it you will probably just skim over because it is not all that necessary to know.

That said, this e-book does have some value to it and provides a lot of useful information.

So is Regrow Hair Protocol a scam? I guess what it really comes down to is what you consider a scam or not. The truth is that there is some valuable information provided in this e-book, which does have the potential to help treat hair loss, but some of the claims made are lies and very misleading.

I seriously doubt that much of anything in the video presentation is true. The guy is probably a paid actor and the entire background story is likely made up. The actual protocol however, which is based around getting more quercetin and luteolin from your diet, is something that could potentially be promising.

So I’m going to leave this one up to you. I’m not going to recommend this product due to the sleazy marketing tactics used, but I’m also not going to tell you to avoid it. If you want to purchase Regrow Hair Protocol you can do so on the official website here.

I hope you enjoyed my review and found it helpful. Please leave any comments, questions, or concerns down below and I’ll get back to you as soon as I can 🙂