Is Diabetes Destroyer a Scam by David Andrews? – A Shocking Discovery 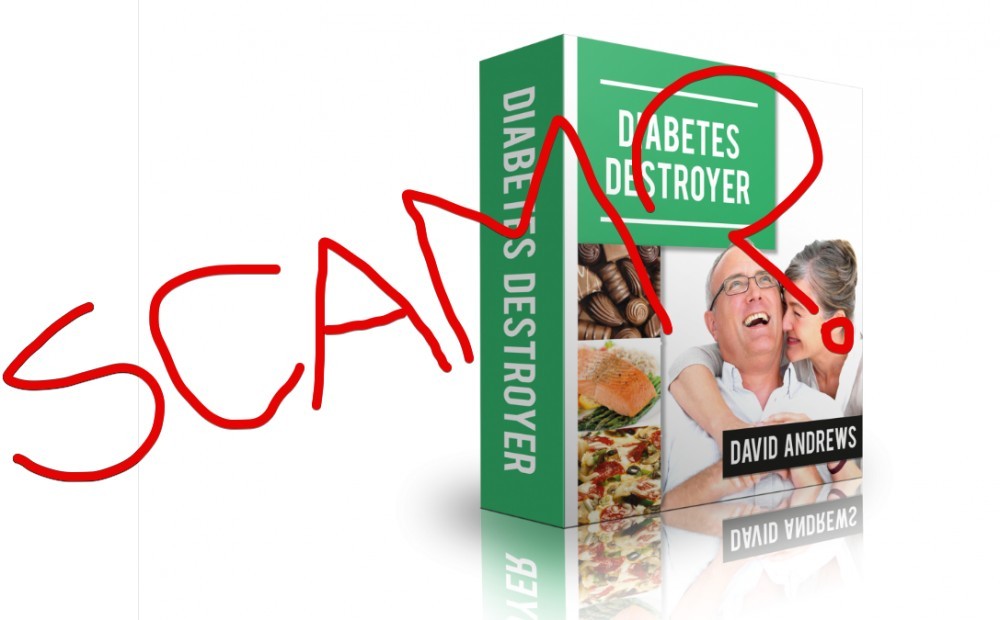 Diabetes Destroyer is supposedly some new natural miracle treatment for curing type II diabetes that was created by a guy named David Andrews. But is this natural solution really the miracle that you are told it is? Can this really cure your diabetes in just 11 days as is stated in the video presentation? Or is this all just a bunch of BS… Is it possible that Diabetes Destroyer is a scam that is just going to be a waste of your time and money?

In this review I’ll be exposing Diabetes Destroyer for what it really is, which is not nearly as good as you are told. This review will be one of the very few honest reviews that you see out there. Many of the other ones I have found while searching Google are just promoting the product and making it seem like the greatest thing ever, but they are just doing this to make money.

When you come across the website for Diabetes Destroyer (diabetesdestroyer.com, thebloodsugarsecret.com, and probably some others) you are instantly greeted with a video presentation by David Andrews, which one heck of a very long and very ridiculous video presentation that is sure to leave everyone who watches it at least a little suspicious that this is all a scam.

He starts off talking about some strange occurrence where 11,000 people’s pancreas kicked back on, their insulin resistance disappeared, and their blood sugar went back to normal… But of course “big Pharma” was trying to cover it all up. He claimed that there is some secret being hidden from the public that could be the cure to type II diabetes. 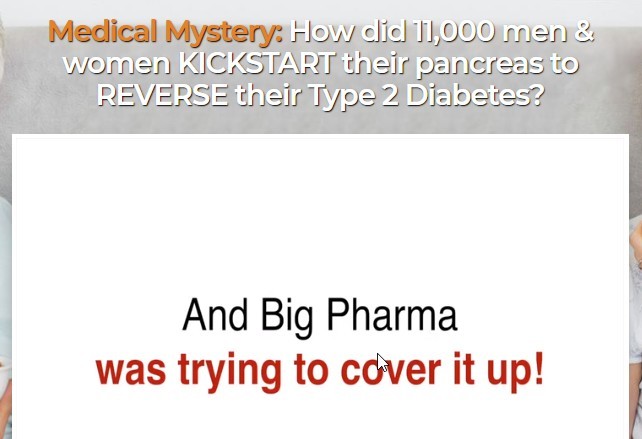 Apparently the doctors couldn’t say what was going on and “big Pharma” was doing all that they possibly could to keep this a secret. Fortunately, some guy named Dr. Taylor was trying to solve the mystery.

The Story of David Andrews

David Andrews claims to be a 51-year-old that is married and has two children. Apparently he had such a severe case of type II diabetes that the doctor told him he had to get his legs amputated. He then dove headfirst into research to try to find any solution so that this didn’t have to happen, which then led him to believe that the entire medical establishment is a bunch of crooks and is trying to keep a lot of very helpful information hidden from the public.

Then the video presentation really shifts over from “big bad Pharma” to all the deadly and life altering circumstances that could come your way from being a diabetic… Having your limbs amputated, heart attacks, strokes etc. Typical fear mongering at its finest.

And then right back to the “big bad Pharma” approach. He claims that pharmaceutical companies know darn well about all the risks that come from type II diabetes, but they just don’t care. All they want is your money. They don’t want to cure you from type II diabetes because they want to keep sucking your pockets dry.

The Cure to Type II Diabetes

In the video presentation he claims that he’s going to reveal some secret that he uses to “instantly” lower blood sugar after he eats something sweet by jumpstarting the pancreas.

Then he starts to talk about how there is this strange occurrence between people who have gastric bypass surgery and their type II diabetes going away overnight. This is supposedly what big Pharma is covering up and Dr. Taylor went out on a mission to find out what the reasoning is behind this.

According to David Andrews the fat deposits that our around the pancreas are the main cause of diabetes. The secret is to remove this fact, but the strange part is that gastric bypass surgery does not do this.

Right on que… Just as I expected… It isn’t the surgery that does this, it is some miracle meal plan that has just the right amount of fats, carbs, vitamins, minerals, etc. that destroy the fat deposits. This definitely is not the first time I’ve heard of some “miracle meal” that can cure all your deadly life-threatening conditions. Herpes Blitz Protocol and the Outback Vision Protocol are two other similar types of scams that I have reviewed, which come to mind.

But anyways… Dr. Taylor supposedly developed a meal plan based on this meal plan that gastric bypass surgery patients use. David claims that Dr. Taylor performed a clinical study with this meal plan and 100% of people with type II diabetes were cured by it.

But of course you can always trust what you hear…

There are so many different health products scams out there today that take the same “big bad Pharma” sales pitch. A lot of people do believe that the pharmaceutical industry is corrupt at least to some extent, and they play to this fear the best they can.

They lead you to believe that the entire pharmaceutical industry is up to no good and group the entire industry together under a negative light.

Half the darn video was talk about how the entire medical establishment is just out to get you.

Now I understand that some of what they tell you is true, such as higher-ups in the pharmaceutical industry being caught bribing doctors, but you have to realize this is not everyone. A lot of different pharmaceutical companies do a lot of good in save many lives… It is not all about controlling people in sucking every penny out of them possible.

Sounds Too Good to Be True

And of course everything in this video presentation just sounds a little bit too good to be true. I mean seriously, think about it… Getting carried from type II diabetes in just 11 days with a natural solution?? You would think something this simple would be much more public knowledge.

Oh yeah… That’s right… I forgot big Pharma was covering it all up.

David Andrews…. Who Is This Guy?

Another red flag is that there is no verifiable information on this “David Andrews” guy. He could easily be a fictitious character that was made up just for the purposes of promoting this scam, and this is actually what I think the case may be.

There is no information given that I am able to verify through research, and the creators of this scam likely carefully designed this way.

Is There Any Truth To What You Are Told?

There is some truth to what you are told, but at the very least it is very misleading and the facts are blown out of proportion to guide you in a certain direction… Typical deceptive online marketing.

So it makes perfect sense that gastric bypass surgery patients, at least some of them, would be cured from their type II diabetes due to the body’s increased ability to use glucose.

That said… the information I found doing my own research is obviously contradictory to what you are told in the video presentation by David Andrews, who tells you that it is the special meal plan that gastric bypass surgery patients are on that is responsible for their cure diabetes. This is all a bunch of BS as far as I can see. I just haven’t been able to find any information that would prove this to be true, and if anyone is out there who has come across proof I would love to hear about it below this post in the comment section.

It it is also worth noting that the statistics David Andrews gives you are likely 100% made up. He claims that Dr. Taylor performed some study where you put diabetics on this new diet he created and saw a 100% success rate. However, I have not been able to find any information on this study either and a 100% success rate would be incredibly rare. Compare this to a long-term study mentioned on WebMD that tracked 400 people post surgery… There was only a 62% recovery rate here.

What Are You Getting When You Purchase Diabetes Destroyer?

Are you ready for possibly the most mind-boggling part of this review?

What you get when you purchase Diabetes Destroyer is an e-book that is just a commercial for the e-book… LOL… I kid you not. Literally you are basically buying the video presentation, about how David Andrews almost got his leg amputated and all that BS, in a written format. How crazy is that?

And if you think I am joking, just a look at some of these reviews I found on Amazon. Apparently this e-book was being sold on Amazon for a while and ended up getting a ton of nasty reviews… 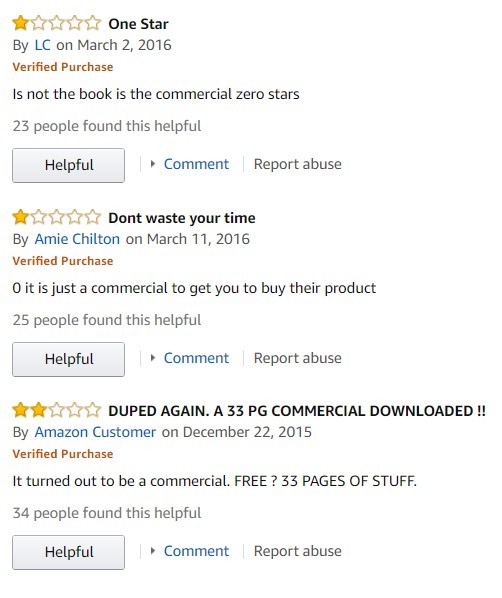 Maybe there was a mistake?

So maybe there was a mistake… Maybe there was some sort of glitch and the book that was supposed to be sold, the real book, was instead replaced with an e-book of the commercial. Maybe we should just give them the benefit of the doubt and say it was all a mistake.

However, I also found the ebook on Free-Ebooks.net and it was the same thing… just an ebook of the commercial. So I really don’t know what to say here. Things are very strange and obviously no one wants to purchase this if they are just getting the ridiculous sales pitch commercial in written format.

What you are supposed to get is the miracle diet that Dr. Taylor came up with.

So anyways… Let’s say that there was just some mistake made and now you are able to actually purchase the real Diabetes Destroyer e-book, which would be the diet plan created by Dr. Taylor.

Even in this best case scenario you still are more than likely just going to get an e-book of diabetes friendly foods, which you probably already know. I have come across these sorts of health products hundreds of times before. They make you believe that they are some incredible natural cure, but provide you with some basic information that can easily be found for free online.

In conclusion, this is definitely not a product I would recommend if you have type II diabetes. While it may provide some good information, I am willing to bet that the information it does provide is easily obtainable for free online, and you probably already know it.

The people behind this product use the typical fear mongering sales pitch, trying to scare you with the whole “big bad Pharma” approach and all the serious conditions that can come from diabetes… And of course Diabetes Destroyer is the only answer out there.

Anyways… I hope you enjoyed my review and found it helpful. Please like and share this post to help spread the word so that others can avoid this scam as well. Also, leave any comments or questions down below and I’ll get back to you as soon as I can 🙂