Is it really a good solution for weight loss, or is The Over 40 Keto Solution a scam that would be best avoided?

They claim that this diet plan...

... however, you usually can't trust everything you hear in marketing material... and a "keto diet for carb lovers"... how is this even possible?

Anyways, you're like me. If something sounds too good to be true the you do your own research. I decided to investigate into this product a bit more to see if it really is as good as they say.

Quick Navigation
Overview
Promotional Material
How It Works (and IF it actually works)
What's Included
The Cost & Refunds
It The Over 40 Keto Solution a Scam?
Pros v Cons
Conclusion - Worth Giving a Try? 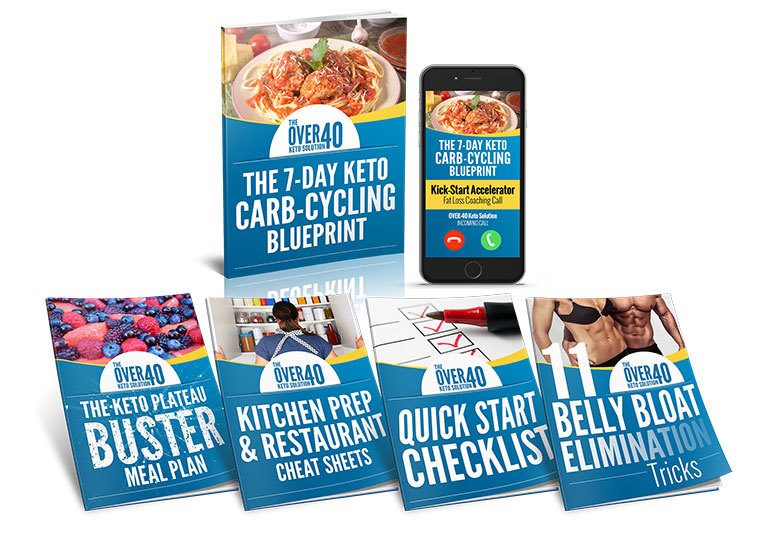 What Is The Over 40 Keto Solution?

The Over 40 Keto Solution is an ebook that provides a specific diet protocol for people over 40 looking to lose weight.

Karen and Shaun Hadsall are the creators of this plan/protocol. They are both certified exercise technologists, authors of nutrition books, and you may have heard of them from other weight loss products they have come out with in the past, such as "Over 40 Ab Solution".

They aren't medical professionals or anything like that, but they are big-time fitness enthusiasts who practice what they preach.

That said, don't fall for all the hype they throw at you in the promotional material.

The promotional material is likely what pushed you to do extra research and click on my review. It sounds a bit too good to be true, doesn't it?

The promo starts off with some typical fear-mongering. They talk about how there rare 4 hidden dangers for keto dieters over 40...

And of course their new formula will avoid these dangers and "you'll see at least 7 pounds gone in 7 days" with it...

We are then told that if you are over the age of 40 the negative side effects of the keto diet, often called the "keto flu" which includes brain fog, fatigue, headaches, insomnia, digestive issues, etc... will actually increase because it "aggravates your hormones even more".

According to the pitch, true ketosis isn't necessary for people over 40, and isn't very good either.

And lastly, I'll end by showing the picture of Karen, who supposedly lost all this weight with this diet.

*Note: Shaun and Karen have also promoted various other weight loss products. So there is more than likely no way the results shown below come from this "Over 40 Keto Solution" alone.

How It Works (and IF it actually works)

The program is mostly based around diet cycling, which includes carb cycling, strategically eating high fat meals on certain days, and intermittent fasting.

What Does Science Say About Carb Cycling for Fat Loss?

There isn't all that much scientific proof that carb cycling is effective, but it does make sense in theory and I was able to find some studies with relevant positive findings, such as a 2010 study in the Journal of the International Society of Sports Nutrition that took 36 overweight women and found that cycling between high protein and high carb diets "may be an effective way to promote weight loss".

Leptin Is Important, and Carb Cycling Can Help

One of the main aims of carb cycling for fat loss is to maximize the effects of leptin, which is a hormone that regulates hunger. And if you are trying to burn fat then you want high levels of leptin production.

What carb cycling can do is help maximize leptin production on high carb days and then avoid resistance to the hormone with low carb days as well.

It Makes Sense In Theory, But...

There isn't much research on the subject.

I know the promotional material for The Over 40 Keto Solution make it sound like some concrete, scientifically proven and guaranteed way to lose weight... but the science is lacking in many of the areas.

Furthermore, studies on the effects of varying amounts of carbohydrates' effects on leptin production have came to different conclusions, as mentioned in this article.

A study from the Harvard School of Public Health that measured the effects varying amounts of carbs have on metabolism found that low-carb intake was related to increased leptin production... whereas others say the opposite, and many theorize the opposite affect.

That said, since carb loading cycles between high and low carbs, it might make sense that it could work either way.

The program also integrates high fat meals into the protocol.

This is important for ketone production, which is why high fat diets are a necessity for keto diet followers.

However, there isn't much evidence that the protocol in The Over 40 Keto Solution will actually lead to increased ketone production with these high fat meals.

Ketone production happens when the body doesn't have much carbs to burn for fuel, and I'm not entirely convinced the eating protocol will lead to this... the reason being that it includes high carb days right before "ketone accelerator days".

#3 - Intermittent Fasting Is Also Part of The Plan

Another part of The Over 40 Keto Solution is intermittent fasting, which is less controversial in this area.

Intermittent fasting is more well proven to aid with weight loss. The reasons for this include that it can increase levels of the fat-burning hormone nerepinephrine, decrease levels of insulin, and may help the body retain muscle mass.

So, Will The Over 40 Keto Solution Actually Work?

It definitely has some promise and will likely give many users results (to some extent), but there is no doubt that it is an over-hyped products and isn't sure-fire weight loss solution it is promoted as being.

What you get is a series of digital ebooks. These include:

#1 - The 7 Day Keto Carb-Cycling Blueprint - This is the core of what you get. It is a very lengthy blueprint of this method that goes over everything you need to know about it, including the guidelines for the meal plans, serving sizes, rules to follow, etc.

Below is the outline of this ebook, which will give you a good idea of what it includes...

#2 - Plateau Buster Meal Plan - Then there is this meal plan, which is for people that hit a plateau.

#3 - Kitchener Prep and Restaurant Cheat Sheets - These provide short and easy-to-follow guidelines when making food at home or ordering out at a restaurant.

#4 - Keto Solution Quick Start Checklist - This provides an actionable checklist to help keep you on track and accountable each day.

#5 - Belly Bloat Elimination Tricks - Changing up one's diet can lead to digestive issues, such as bloating. The makers of this protocol know this and have included some tricks to help eliminate the problem.

#6 - Kick Start Accelerator Coaching Call - And, last of all, you have the coaching call. You get one of these after purchasing The Over 40 Keto Solution and it includes talking live with a weight loss coach.

This is more than likely a marketing stunt and it's always sold for $29, but I'm not entirely sure.

Anyways... I think $29 is a very fair price for such a product. Although it likely won't work for everyone, it does have some promise and with the amount of information provided $29 isn't much.

Even better, the good news is that if this doesn't work at all you have plenty of time to request a refund.

They have a 1-year money back guarantee.

You can request a refund by contacting them at:

*Yes, that is the right email listed.

It The Over 40 Keto Solution a Scam?

Nope. Definitely not a scam. However, it would be nice if they would tone-down the marketing material a bit.

There is a lack of science in this area, but it is marketed almost as some guaranteed way for people over 40 to lose weight. There is no doubt it has potential, but I think the marketing is a bit over-the-top.

Conclusion - Worth Giving a Try?

I think there is a very good chance that The Over 40 Keto Solution will work for many people who try it, at least to some extent. There is no guarantee, but many people swear by the protocol included here, although it's not the best science-backed diet. And, even if it doesn't work as well as expected, there are still a lot of other health benefits that could come from the healthy eating.

Just don't fall for the whole "you'll see at least 7 pounds gone in 7 days" hype. This will greatly depend on your starting point and many other factors.

For only $29 there's not much to lose. So, although the marketing material is a bit much and makes the whole thing seem like a scam, I think it could be worth buying into. But the decision is ultimately yours.

I hope you enjoyed this review and found it helpful. If so, please share this post to help spread the word!

Also, leave your comments below. I'm interested in your thoughts/opinions on The Over 40 Keto Solution.