Is Vedda Blood Sugar Remedy a Scam? – Pretty Much & I’ll Show You Why

The truth is that, while this may not be a scam (depending on what your definition of a scam is), it is not nearly as amazing as it is said to be. I’m sure you picked up on that… Judging by the fact that you are reading my review now and probably wondering for yourself if this is a scam.

The marketing that is done for this product is absolutely ridiculous. It is massively overhyped and just all around misleading. This certainly is not the miracle that this “Michael Dempsey” guy claims it is.

As I said, the Vedda Blood Sugar Remedy is the creation of a man named “Michael Dempsey”, whose name I put in quotation marks because I’m hesitant to believe that this is actually his name. I have not been able to find any real proof that he is who he says he is, and judging from the amount of deception in the marketing material, it very well could be just another lie.

But anyways… If you land on the official website you will be greeted with a video presentation where he starts out talking about the story of his wife who had a severe case of type II diabetes. He claims that his wife Rachel was dying in the hospital room, with paralyzed arms and legs. Her blood sugar levels had put her in a diabetic coma, which was life-threatening.

This horrific day is apparently what led Michael to go on a life-changing journey to discover the secret to curing type II diabetes, which he supposedly found in the jungles of Sri Lanka.

He claims that this “tribal trick” has been used to help 37,838 people recover from type II diabetes and that this information isn’t going to be around for much longer because “big Pharma” is trying to shut it down… Of course he tells you that they do not want the information getting out because they want to keep on sucking the money out of diabetes patients.

How He Supposedly Came Accross This Secret

The story goes that Michael was in the hospital with his wife when he met a 91-year-old man named Lakmal, he was from the Vedda tribe of Sri Lanka. Michael told him about his wife’s situation, almost dying from type II diabetes, and the old man just smiled… Because of course this old man had the cure for diabetes.

They stayed in touch and Lakmal mailed him some old book of tribal recipes, which he then paid a medical researcher named Chamida to develop a cure based on. And of course now this cure is seven times more powerful than the original Vedda people’s diet and consists of simply eating normal foods.

Sounds a bit fishy, doesn’t it?

I’m sure you are suspicious of the whole store that is being told here, as anyone should be. It just seems too good to be true, does it not?

Well… As I said… It is probably completely made up.. Fabricated.

There are a lot of red flags, one of which being that there is no proof this guy’s name is actually “Michael Dempsey”, in the fact that the pictures he shows of his family are completely fake, which I do have proof of.

At one point in the video presentation he shows a picture of what are supposed to be his two daughters and son. But as you can see, this is just a stock photo that was purchased online… These are not his kids.

And by the way, I ran a reverse Google image search to find that this photo was indeed a fake.

These sales pitches always start out with some tragic story about a loved one almost dying. And of course the reason they almost died was because of prescription medication, which doesn’t actually solve the problem… And of course “big Pharma” is actually out to get you and does not want to cure your problem because they want to cycle the money out of you. Then the sales page turns to some life-changing journey in which the author found some cure in some remote part of the world.

Those two other products I just mentioned above, which I have reviewed, literally follow the same exact format. Coincidence?… I think not.

Is Anything You Are Told True?

Well the entire storyline is complete BS, but is anything you are told actually true?

Believe it or not, there is some truth to what he says, mostly when it comes to the scientific findings he talks about. The only problem here is that these scientific findings are twisted/turned for the sake of promoting this Vedda Blood Sugar Remedy. In other words, he is not giving you the full story, only presenting you with scientific findings that will help the products all better.

For example: it is true that coconut oil has been found to be good for cholesterol, or at least better than many other oils out there. According to Harvard Health, it is rich in lauric acid, which the body processes different from other saturated fats. This makes it slower to digest and less likely to be stored as fat, which is good news for diabetics.

There our studies out there showing that it can prevent obesity and insulin resistance, as well as lower blood glucose levels.

But what he doesn’t tell you is that there are downsides to coconut oil… Such as how the tests on coconut oil also showed a higher fat buildup and insulin resistance in the liver, which I learned on Healthline.

And this is just one example of some of the selective truths that were told during the video presentation. Overall it is definitely misleading way tells you.

What Are Other People Saying About It?

One think I always like to do when researching and looking into products like this, is see what other people were saying about it. And I’m not talking about people that are promoting at… I’m talking about people who have actually bought this “remedy” and have tried it for themselves.

Fortunately, Vedda Blood Sugar Remedy is an e-book and it is available on Amazon. There are a decent number of reviews on it, and as expected most of them are negative. Below you can see just a snippet of some of the reviews from people who have actually bought this… 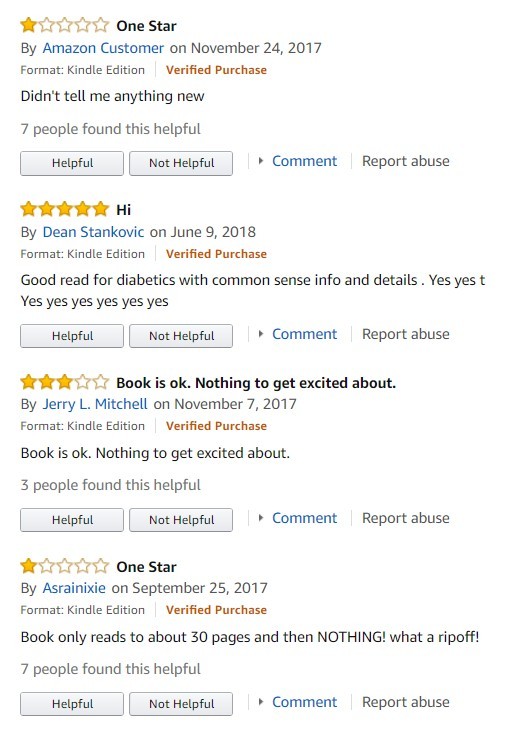 Pretty bad right? This is no surprise.

Is This Something I’d Recommend?

Vedda Blood Sugar Remedy is simply an e-book that provides well-known information on diabetes and gives you some natural “remedies” to help fix the problem. It is all presented as some “secret” new remedy that was just discovered, when in reality this is far from the truth.

As you can see from the reviews above, one person states that it “didn’t tell me anything new” and another person describes it as “common sense info”.

This is a common case of a crappy product that is marketed as some Holy Grail… That is magically going to cure your health condition. This is deceptive marketing at its finest.

While it is possible that you will see positive results from following this remedy, I still definitely do not recommend anyone purchase Vedda Blood Sugar Remedy. If you are someone that eats very unhealthy and has type II diabetes, then starts to fall this remedy and the recommended healthy eating… Then you probably will see positive results. But this definitely does not mean that is worth paying for. All this information can easily be found for free online.

Diet and exercise seem to be the best solution for type II diabetes. This is well proven in science in the good part is that the side effects to diet and exercise our nothing but positive… Unless of course you consider post exercise muscle fatigue as being a negative side effect.

But anyways… I hope you enjoyed this review and found it helpful. Please share this post to help spread the truth because I am sure there are a lot of people getting ripped off by this scam right now. Also, leave any comments or questions down below and I’ll get back to you as soon as I can :-). If you have your own review for Vedda Blood Sugar Remedy I would also appreciate it if you left your opinion down below.