Is Herpes Blitz Protocol a Scam? – In My Opinion Yes It Is

The truth is that this pretty much as a scam. I’m not going to call it a “full-blown” scam but at the very least it is somewhat of a scam due to the extremely misleading and deceptive marketing tactics used.

Most of the reviews out there online are talking about how amazing this product is, but they are making money off of promoting it at the same time… Which is why they’re claiming it is amazing.

In my honest review I will be going over some of the lies and misleading information given to expose this for what it really is.

You are probably reading my review now because you saw the video presentation for Herpes Blitz Protocol and thought it seemed a little bit too good to be true. So of course you did some research and came across my review here. And it’s a good thing you did… If you would’ve bought this product based on the information provided you would likely be extremely disappointed.

The creators a guy named “Josh Parker”, he was supposedly an Army officer. The reason I am putting quotation marks around his name is because this likely isn’t his real name. Based on all the other lies that I’m going to show you, I am hesitant to believe anything that they say.

But anyways… Supposedly his girlfriend “Emma” was suffering from an infection and this is what led him to dive deep into research and finally come across this incredible protocol. 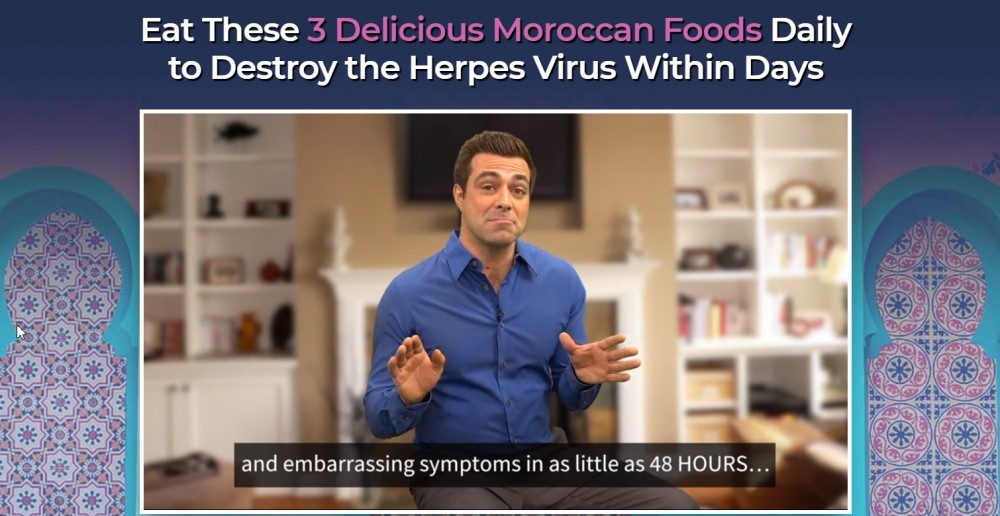 Basically this protocol consists of eating three ingredients that you can pick up at your local grocery store. It is very simple and the reason that Josh says it is still unknown is because the big pharmaceutical industries are doing everything they can to keep it that way.

According to him, they are trying to stop this information from getting out there so that they can keep the sick people sick and continually drain their bank accounts.

How It Works (Allegedly)

So as I said, this protocol consists of eating three ingredients.

Now what you may notice is that all of these three ingredients are rather common. You likely haven’t heard the scientific names for them, but as you can see both Quercetin and Resveratrol are found in common foods that many people we every single day. The only one that is more uncommon is Curcumin, which is found in  turmeric. This isn’t consumed quite as commonly, but you can find it in pretty much any major grocery store.

My point here is that these ingredients aren’t very uncommon. So how is this amazing protocol going to eliminate herpes from your body? If this were the case then there should be a lot of people with herpes getting cured on their own from eating these foods without even knowing it.

While these ingredients are all good, and they do have a lot of scientific research backing their health benefits, one of which being the ability to help strengthen the immune system which could in turn help fight off the herpesvirus, there is definitely no scientific research showing that these three ingredients will eliminate herpes from your body.

The bottom line here is that there are a lot of unverified claims made in the sales pitch.

Josh claims that this protocol has been successfully used on over 67,000 people yet there is no information about this being true in any way. It seems that Joshua just made up a large random number to try to sell more of this product.

If this really had cured over 67,000 people and don’t you think they would be more people talking about it? I mean I know that he claims the big pharmaceutical companies are doing everything they can to stop it from becoming mainstream, but I am sure there be people posting all about it all over social media and things like this.

As I mentioned above, there is no scientific evidence that shows these ingredients to eliminate the herpes virus. There is a lot of research showing that it can improve health and boost your body’s ability to fight off unwanted invaders, such as viruses, but no direct research on the subject proving what he says.

Herpes is no longer un-curable

He tells you that herpes is no longer un-curable and that the big pharmaceutical industries just want you to believe that it is so that they can keep taking your money. This of course is completely unverified and as far as I’m concerned, untrue.

There are still no cures that exist or herpes… Only treatments to help prevent and shorten outbreaks.

Deceptive Marketing At Its Finest

This is a great example of deceptive marketing. They lead viewers to believe that the entire medical industry is evil and out to get you. They just want to keep you sick so that they can keep taking your money. This is a statement I have come across when reviewing other scammy health products as well, such as Fungus Hack and Patriot Power Greens.

And of course these big pharmaceutical companies are trying to shut down the Herpes Blitz Protocol website right now… So you have to buy in as soon as possible before it is gone forever.

All of this is done to scare you into buying this product.

Just about everything you are told is either misleading or a lie. In fact, the testimonials that Josh presents from people that have supposedly been cured by this protocol, such as the one below with “Toni Rose”… Are completely fake.

Toni Rose was supposedly some college student that had herpes and got made fun of a lot for it. Of course she started using this protocol and eliminated it, which would be amazing if it were true… But it is not. I did a reverse Google image search for the image presented here and found that it is a stock photo that anyone can purchase and use online…

What The Heck is Herpes Blitz Protocol Really?

So throughout the whole video presentation you are misled and might not even know what Herpes Blitz Protocol really is. You might be thinking is a supplement that you are buying into or something like that, when it is not.

Herpes Blitz Protocol is just an e-book that talks about these 3 “odd” foods and what they can do for you. The book is 108 pages long

The ingredients that are recommended within this e-book are definitely good, and will lead to a stronger immune system if you aren’t already taking them, but they are definitely not any miracle workers.

I find it extremely unlikely that these three ingredients are going to eliminate a serious case of herpes. Now maybe they would be effective at keeping herpes from getting started and spreading in the first place, but to eliminate an established case that already exists seems very unlikely.

You don’t have to take my word for it. You could always go to your doctor and ask them about these three ingredients to see what they think about them. I am willing to bet they are going to tell you it is a scam… But then of course the entire medical industry is out to get you… As Josh leads you to believe.

I think we can pretty much all agree that this is a scam. Yes, there is value in this e-book and they aren’t completely scamming you out of your money, but it is definitely a scam in the fact that this product is nowhere near as amazing as it is said to be. That said, if you do wish to purchase this ebook you can do so from the official website Here.

Please share this post if you found it helpful and want to help spread the truth. There are a lot of scam health products being promoted out there and I am trying to spread the word on the sorts of things. Also, leave any comments, questions, or concerns below and I’ll get back to you as soon as I can 🙂